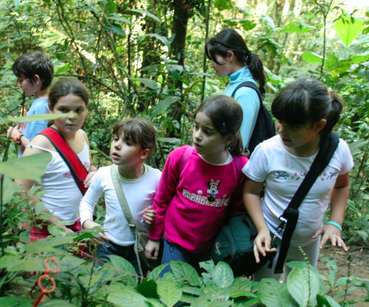 This game is played to introduce the concepts of protective coloration and adaptation, as well as to enhance children's observational skills. A benefit of this increased visual awareness is that children become much more careful about littering outdoors.

Look for a trail going through an area where you can see the ground and where there isn't a lot of tall grass or thick shrubs. (A forest where there are both small and large trees, leaf litter, rotting logs, and some plants is ideal.) Choose a 65- to 100-foot section of the trail making sure that it is wide enough for two people to pass. Along the trail you'll place 16 to 24 man-made objects. Some of them should stand out, like brightly colored balloons or fluorescent pink cockroaches. Others should blend with their surroundings, and therefore be more difficult to pick out. Keep the number of objects you've planted secret.

The children walk over the section of trail one at a time, with intervals between them, trying to spot (but not pick up) as many of the objects as they can. When they reach the end of the trail, they whisper in your ear how many they saw. Tell each child the total number of objects, or, if you prefer, the fraction or per cent of the total that they've found. Encourage the children to walk the trail again, looking for any objects they've missed. If you want to make it easier for the players, place a marker (like a red bandanna) near the objects that are the hardest to find.

In setting up, I've found it's helpful to use rope to mark the side of the trail where the objects are hidden. Then place the objects no further than four feet beyond the rope (make sure to tell the players this). You can, however, hide the objects at different heights, and in places where they can be seen only if you turn and look backwards. This helps the children break out of the habit of looking only straight ahead. If you have a large group, be sure to make the trail long enough so that everyone can be on the trail at once. It's also helpful to ask half the group to begin along the middle of the trail, and then come back and finish the first half. This way no one has to wait in line too long.

To challenge older children, and keep them interested, it's important to have some objects that are placed in plain view, but are still difficult to find. One of my favorites is a 3 X 4 inch camping mirror. When its top edge is tilted toward you, the mirror reflects only the forest litter, making it blend in perfectly with its surroundings. (Lay a small branch over the top of the mirror to cover its edge and to hold it upright.) Often I've had as many as fifteen people kneeling and standing right in front of the mirror, gazing intently, but not seeing it, until I've touched the mirror. Objects like rusty chains, nails, rubber bands, and clothes pegs work well, too.

To allow everyone to see where the objects were hidden, go to the beginning of the trail, and start walking along the rope, and have the players (who are standing further back) point out the objects as you go by each one. As you pick up the objects, have a designated player collect them, and another player to count out the number of objects found as you go along.

End the game with a discussion of the ways camouflage coloration helps animals. Then go on a search for small camouflaged animals (insects, spiders, etc.).