In Stillness, Nature Reveals Itself

“I think I could turn and live with the animals, they are so placid and self-contained" –Walt Whitman

When we observe wild animals unaware of our presence, we feel a profound, magical bond with them as they live their natural lives.

Humans, however, normally disrupt the usual routine of animals. If, however, you sit motionless for fifteen minutes or longer, the natural world will once again begin returning to its normal, harmonious routine.

As you quietly melt into the landscape, its inhabitants will come to accept you. Your peace and joy will grow as you become part of their lives and world.

Jobs were scarce during the worldwide depression in the 1930s. In a small Midwest town in the United States, the telegraph office announced they’d be hiring a new telegraph operator. On the day of the interview, sixty hopeful men packed the waiting room.

To relieve their tension, most of the job applicants joked and chattered loudly with one another. One man, however, sat quietly alone near the office door.

Suddenly the quiet man stood up and walked into the office. A few minutes later, the office manager came to the door and announced, “Thank you all for coming today. We have hired someone for the job.”

Why was the man hired?

While the other men were talking, the office manager had tapped out in Morse code, “If you hear this message, come in and accept the job.” Only one man was attentive enough to hear the message.

One of my most endearing nature encounters happened one spring afternoon in the Sierra Nevada Mountains. I had been sitting peacefully enjoying the forest stillness. Thirty feet away, two young pine martens poked their heads out of their den. (Pine martens are weasels, about the size of a small domestic cat. They are extremely fast and elusive.)

These martens were only a couple of months old and very inquisitive. At first they were curious about leaving the safety of their dens, but soon they lost their fear and began wresting and chasing each other.

One of them finally noticed me, and with curiosity overcoming its native caution, came forward to find out who I was. The other young marten followed, stopped, and gazed intently at me from just a few feet away. Meanwhile, the braver and more inquisitive one came right up and began sniffling my left leg.

Mother, who apparently had been busy elsewhere, came back at this moment and was greatly alarmed to see her offspring so close to me. She rushed forward, barked a come home at once!, and herded her two kits into the den.

I was profoundly moved by the innocent trust of those two young pine martens, and by the joy I felt looking into their beautiful curious eyes. Their lack of fear deeply touched my heart and made our meeting all the more memorable. I would never have felt such a bond with the martens—or probably even seen them—had I not stopped and sat quietly in the forest glade.
Deep Nature Play
​A Guide to Wholeness, Aliveness and Creativity, by Joseph Cornell 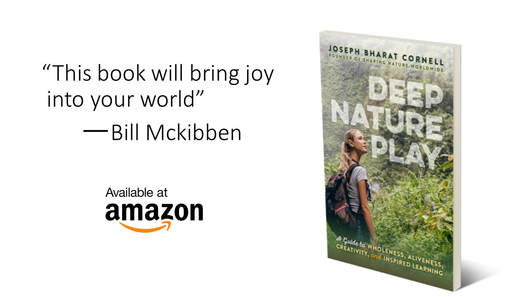 Order now
If you enjoyed the above article, you might also enjoy these other articles by Joseph Cornell: