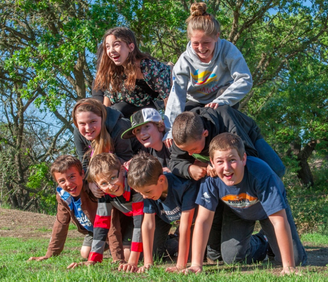 Pyramid of Life demonstrates food chains and other ecological concepts in a lively, experiential way. To prepare, write on cards the names of plants, plant-eaters, predators, and one top, or apex, predator; number each card with its trophic level (plants, I; plant-eaters, II; primary predators, III; and top predator, IV).

Because plants and animals form an interconnected community, choose subjects from a local habitat or ecosystem, such as freshwater, grassland, or ocean. For example, for a class of twenty-seven participants, select fifteen plants, seven herbivores, four predators, and one apex predator. (In the accompanying sidebar are twenty-seven fun plant and animal names to use until you can create your own set.)

Give each player a card. Then ask players with a I on their card to come forward, form a line facing the rest of the group, and introduce themselves. You can then ask, Are you all plants? Yes, they reply. Ask the plants to kneel in a line facing you.

Now there is only one person left. Ask if anyone has a IV. When that player comes forward and introduces himself, tell him he is the top of the food chain, and have him stand behind the third row.

Ask the kneeling plants, “If we built a human pyramid to represent the food chain, could you support all the animals behind you?” NOOOO!!! “Well, we’re not going to build a pyramid today, so you can relax!”

Tell the first row, “The plants don’t look very good. I see that insects have been eating you. To help protect you, I’m going to spray you with pesticide. Don’t worry, it won’t hurt! The bandana represents one poison part of pesticide.” Then place a bandana on the head of each plant.

Tell the group, “The golden eagle, which consumes a large variety of herbivores and predators, inherits ALL of the pesticide. Golden eagle, could you now keel over and succumb to pesticide poisoning?”

Explain that the scientific name for the increasing concentration of toxic chemicals in the tissues of organisms at higher levels in a food chain is “biological magnification.” Banning DDT and other pesticides has increased the populations of apex predators, such as the peregrine falcon and the brown pelican.

To conclude the activity, you could ask, “Where do most human beings eat on the food chain?”