Concepts, skills, and qualities taught: Review, Natural History
When and where to play: Day/Clearing
Number of people needed: 6 or more
Suggested age range: Ages 5 and up
Materials needed: Rope, 2 bandanas 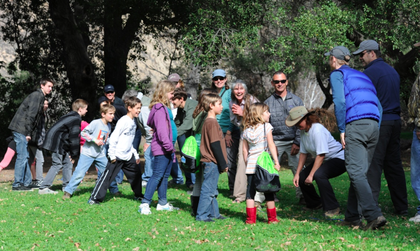 Owls and Crows is an excellent game for reviewing information learned in class. To play, divide the group into two equal teams, the Owls and the Crows. Lay a rope across a clear area, and have the teams line up facing each other, each team about two feet back from the rope. About eleven feet behind each team, place a bandana on the ground to indicate home base.

When the leader makes a statement about nature, if the statement is true, the owls chase the crows; if it’s false, the crows chase the owls. If a player is tagged before he crosses the home base line, he joins the opposite team.

There is a certain amount of happy pandemonium in this game— players forget which way to run or are so confused by the statement that sometimes half the players run one way, and half the other.

To minimize chaos and make things as clear as possible, use blue and red bandanas to mark the two home bases—blue, behind the crows; red, behind the owls. Tell the players that the blue bandana represents “true blue.” When a statement is true, the owls chase the crows (all players run toward the blue bandana). When the statement is false, the crows chase the owls (all players run toward the red bandana). You can also point out natural features to remind players which way to run; for example, forest for true and meadow for false.

Make sure your clues are unambiguous and age appropriate. For example, if you say, “The sun rises in the east,” students may not be sure if you mean that the sun is first seen in the eastern sky (true), or that the sun rises at all—false, because it’s the rotation of the earth that makes it only appear to rise. The best statements are simple and clear: for example, “birds have teeth,” or “insects have six legs and a three-part body.”
​
Before beginning, it’s helpful to make a few practice statements. Have the players point in the direction they would run instead of actually running. Once everyone can easily point out the direction for true and false statements, then begin!